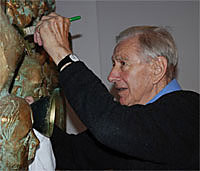 Born in Sheffield. Studied at Sheffield School of Art 1941-44 and the RCA 1945-7. Worked with and shared a studio in the King’s Road, Chelsea with George Fullard. They produced displays of Queen Shubad’s Harp and a Celtic chariot and a fountain for the temporary pavilions at the Festival of Britain in 1951. (Queen Shubad of Ur worshipped the Babylonian Earth goddess, Ishtar.) Later they produced a model of the Coronation cavalcade for the Ideal Home exhibition.
Adsetts moved to Sweden in the fifties, where he designed glassware and on returning to England set up a branch of the Swedish company, Konstsmide. He and his wife sold Swedish lighting from their own shop.
Gareth Taylor has a large number of his works in his Scandinavian glass collection, which he exhibited in 2010 at the Cambridge Glass Fair. He is producing a book on Adsetts.

Artist portrait is credited to Christine Walla and copyright of Cambridge Glass Fair.

Given to the Trust in 1957 by landscape architect to Harlow, Mr John St. Bodfan Gruffydd it was sited in the Town Park next to Park Lane at the base of the waterfall.
The sculpture was smashed and destroyed in the year of his death. It is recorded by Historic England as one of our lost works.

Aphrodite: Greek goddess fathered by the god Uranus by his union with the sea. She arises from the sea foam and some of her symbols are the scallop shell and swan.
Aphros: Greek for foam.

Also donated by Bodian Gruffydd in 1957 a new stone seat was carved by Paul Mason in 1978.The three pedestals depict a ram, mythical winged beast and a boar. The original slab edges were carved with heraldic swags and bestiaries. The replacement has a simple Greek frieze pattern.