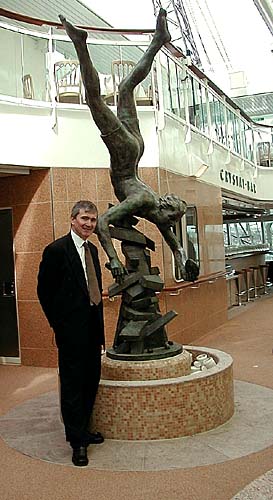 Allan Sly was born in Windsor in 1951. After a course in City and Guilds sculpture he attended London Art School from 1971-4 and then the Royal Academy 1974-77. He is a senior lecturer at Wimbledon School of Art and became a member of the Royal Society of British Sculptors in 1992.

He is well known for his large public figurative work such as the bronze Window cleaner, commissioned by Capital House which stands at three metres in height outside Edgware Road Tube station, his four and a half metre high Newmarket Stallion on the local roundabout and his Pearl Diver for P&O.

Pinnacles, near the roundabout at the end of Elizabeth Way.

Sly submitted ideas for the sculpture to be sited outside Harlow Sports centre. The work was commissioned in 1991 by the Art Trust from the four maquettes offered. The work was re-sited at the redevelopment of the Sports Centre into housing.

Sly often uses ambitious compositions in his work  which require skilful engineering to balance. His Surrey Scholar, commissioned for the Golden Jubilee 0f 2002, in Guildford High Street and the rearing stallion with his handler in Newmarket are two other examples representing energetic motion.

The Runaway Rotavator was relocated to the Poundland Distribution Centre, near the Roydon Road roundabout after Sly visited and suggested repairs, which were paid by Poundland.

It now stands on paving stones instead of grass.