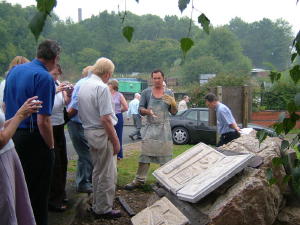 Born 1959 in Chorley, Lancashire. Studied at Preston Polytechnic 1978 -9 and then printmaking at the RCA 1981-4. On finding a piece of Portland stone he made his first piece of sculpture and went on to make more often using found objects to work on like barrels, butchers blocks and once an old church door. His home is full of these carved and reworked objects.
His imagery, usually in relief carving, is of symbols, heraldic beasts, figures and architecture. Lettering also often features.
He runs workshops for schools and adults and his work can be seen in many locations, notably by the River Stort in Harlow.
Visiting his father’s village in Ukraine in 1989 he found out that his uncle had been a monumental mason in their local cemetery. In 2011 he carved a tombstone for his parents’ grave. He lives and works in Essex.

Made for the River Stort sculpture trail the text inscribed reads: Man may come and go but the river goes on forever. Lysycia heard this in a talk by the local historian Richard Thomas.