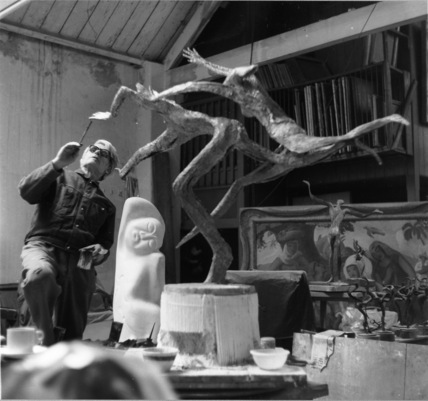 Leon Underwood was born in London 1890 he studied at Regent Street Polytechnic, the Royal College of Art and after the First World War, the Slade School of Fine Art. He taught in London art schools, Ralph Brown was one of his students and Henry Moore attended his drawing classes. He was also a writer and engraver and founder of the art magazine, The Island. His work often shows the influences of non European and tribal art. There are some good examples of his output in the British sculpture galleries of Tate Britain.
He died in 1975.

Purchased by the Trust in1979 this is a larger version of the stone carving (at the Gibberd Garden). Although the clenched fist is associated with the symbol of Republican solidarity with those suffering in the Spanish Civil War, Underwood saw it standing as part of a greater peace movement. Michael Chase, who joined the Trust in 1980 (former director of the Minories Gallery), secured the piece from the Underwood family. He wrote that Underwood “dreamed of a giant anti-war memorial on the cliff-top above Dover…the fist is closed in a gesture of peace not war (with the thumb enclosed by the fingers)”. Underwood served in the First World War.
The cast was taken by Underwood shortly before his death. The bronze was moved into the Gibberd Gallery, while the plinth in the Stow was being repaired and returned to the Stow in 2014 (see Newsletter No 19 Feb 2014)

These two bronzes were purchased from Underwood’s niece in 1983 and installed in the foyer of Tye Green Library from where they were stolen.