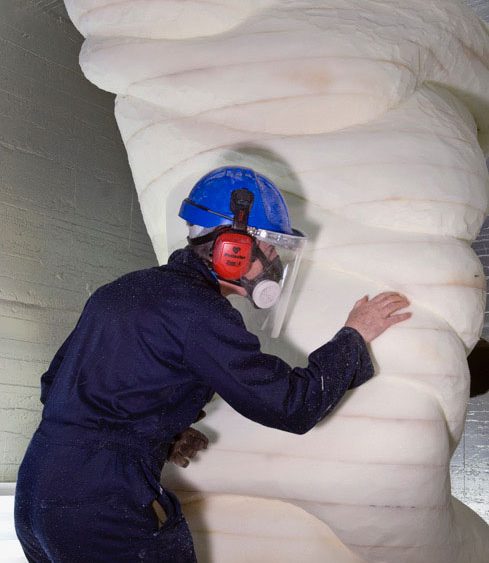 Nick Turvey graduated in 2006 with an MA from the Royal College of Art in London. Since then he has exhibited his sculpture internationally, and won a number of large public commissions. In 2008 he received a bursary from the Royal British Society of Sculptors, in 2009 an award from Arts Council England, and in 2010 the Brian Mercer Award for Stonecarving.

He had a one-man show at the Gibberd Gallery ‘All Alone Together’ 19.6 – 24.8.13, which was an installation of three ‘bunkers’, constructed by and used by the community.

Nick Turvey, All Alone Together, 2013

Harlow has a new town sculpture on the green by the Harvey Centre and the Playhouse. Offered on loan for ten years to the Art Trust, ‘Chief’ by Nick Turvey can be appreciated in the round, making its form dynamic for the viewer. It was acquired through the efforts of the Art Trust and the Council. The Friends were happy to contribute to the cost of its transportation from studio to site.
Many of you will be already familiar with Nick Turvey’s piece ‘Methuselah’ (2010), which came out of the Newhall projects and was funded by William Moen. The sculpture made of Cor-ten steel refers to a 5,000 year old pine tree. It is intended to stand eventually in water.
His exhibition in the Gibberd Gallery in July 2013, All Alone Together, a series of ‘bunkers’ was constructed with volunteers from Essex Youth Offending Team, Trades trainees, and Gallery helpers and was as much about the making as the Gallery experience. The project brought in community, theatre, music and history events.

Cor – ten steel 320 x 320 x 400 cm
The Harlow Art Trust and the developer William Moen selected an entry by Ekkehard Altenburger for the Newhall project in 2009, who was commissioned to produce the piece in honour of Lady Gibberd. Moen agreed to fund the this piece by Nick Turvey as well. Both were sited in 2011 and presented by Moen, William Rea from HAT and Robert Halfon,MP. They stand not far from each other, Sophrosyne located by the buildings and Methuselah on the greensward.
In 2012 these were contenders for the Marsh prize, annually given to the best public sculpture in the UK. The third nomination was for Harlow Town itself since its rebranding as ‘sculpture town’.