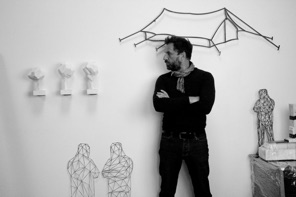 Worked as an apprentice stonemason 1983 -6
Master stonemason 1988-9 working on the Gothic cathedral of Schwabisch in Southern Germany.
Studied sculpture at Bremen and then Edinburgh College of Art 1991 – 6.
Came to live in Britain 1995.
MA from Chelsea 1998 -9
He has shown at the RA summer shows in 2013 & 2016.
Recently working on a large scale piece for VW UK ‘Thoughts on a Banked Curve’ Milton Keynes.

His move to London was because of his interest in architecture, which inspires his work. In 2001 he made a film about Oscar Niemeyer in Rio. The materials he uses are stone, metal and glass.

The sculpture was commissioned by the Trust and the developers of New Hall estate, to commemorate Lady Gibberd. Selected from competition entries the winner, Sophrosyne and an additional work, Methuselah, by Nick Turvey were commissioned and sited in 2010.
Sophrosyne was named after the Greek goddess of prudence and moderation or the balance between rationality and passion, its shape inspired by an annual egg hunt held in the Gibberd Garden. It had been wrapped in brown paper for the unveiling ceremony which was removed by Altenburger’s young son, Anton.
The artist made a companion piece, Sophrosyne 11, which is in the Museum of Contemporary Art in Guatemala City.
Attending the launch were William Moen one of the developers, William Rea, for the Art Trust, Robert Halfon MP and Stan Newans speaking on behalf of Deborah, Lady Gibberd’s daughter.
In the development of new neighbourhoods within the Town public sculpture have been seen as an integral feature.

The two sculptures and Harlow Town itself as a public sculpture collection were shortlisted for the national Marsh arts prize in 2011. Harlow ‘Sculpture Town’ won the award.