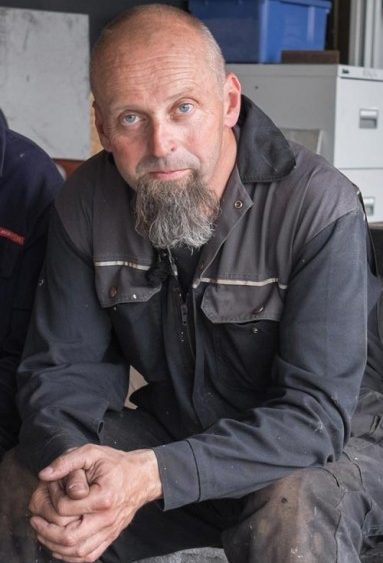 Jonathan Clarke was born in 1961 in Suffolk, UK, where he continues to work today. At the age of 16 he took up an apprenticeship with his father, the sculptor Geoffrey Clarke (RA), and he began exhibiting his own sculpture in the early 1980s.
Jonathan works in sand-cast aluminium, initially carving his sculpture in polystyrene. This method – pioneered by his father and mastered by Jonathan – relies on the destruction of the original mould as it is vaporised by molten aluminium. The result is an entirely unique, one-off sculpture.
Writing about Jonathan’s first solo show (Chappel Galleries, 1993), Galleries magazine noted his ‘line of inheritance from the masters of the century, from Gabo, through Moore, to Paolozzi.’ His style, whilst abstract and architectural, carries a great deal of emotional resonance, often taking inspiration from social, spiritual and mythological subject matter. Other influences that Jonathan cites include the sculptors Eduardo Chillida and Anthony Caro, as well as two-dimensional artists such as Robert Motherwell and Mark Rothko.
Jonathan has had a series of successful exhibitions over the years with regular shows at North House Gallery and Chappel Galleries (both in Essex), and Strand Gallery in Suffolk. He also has work exhibited abroad, most notably in Italy, Denmark and the US, and the Metropolitan Art Museum in Tokyo. Between 1989 and 1999, he was selected for the Royal Academy Summer Show seven times.
Jonathan Clarke’s renowned skill for creating monumental sculptures has attracted a number of prestigious commissions, including an 11-metre wall-mounted cross for Ely Cathedral (The Way Of Life, 2001), an eye-catching figure for the town of Colchester (Boudica, 1999) and a twelve-piece exhibit for Trinity Hall’s permanent collection in Cambridge (Twelve, 2006).

Commissioned by Barratt Homes for the Fifth Avenue Residential development.

These are three of a series of 15 based on the stations of the Cross originally made for an exhibition in Denmark 2006. The remainder are in collections in the UK and US.

Symbolically representing the Condemnation of Jesus, the Deposition (taking down from the cross) and the Resurrection.