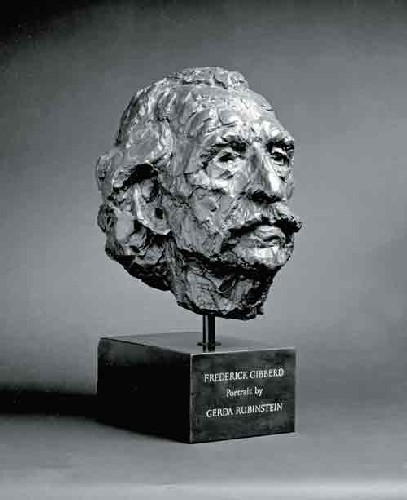 Born in Coventry in 1908. He studied architecture in Birmingham School of Art and began practising design in 1930. He is known for his designs of London Airport, the entrance to Coutts Bank, the Mosque in Regents Park and in 1960, Liverpool Metropolitan Cathedral. He received a Knighthood in 1967.
He was appointed Master Town Planner for Harlow New Town in 1947 and initiated the idea of Harlow Art Trust to build a sculpture collection for the Townscape.
He was awarded the Gold Medal of the Royal Town Planning Institute in 1978.
He lived in The House, Marsh Lane, Harlow until his death in 1984. The garden and house are open to the public and run by the Gibberd Garden Trust.

His British watercolour and drawing collection are on permanent display in the Gibberd Gallery, Civic Centre and are managed by Harlow Art Trust.

Erected in 1980 to commemorate the building of Harlow New Town 1947 -1980. There are four plaques inset at the base bearing the dedication inscription, and the armorial insignia for Essex County Council, the Development Corporation and the District Council.
It was sited in the reconstruction of the Broad Walk and stands at the crossing of it by Little Walk and East Walk.

In the British Watercolour and Drawing Collection, housed in the Gibberd Gallery and bequeathed to Harlow by Sir Fredrick, there is the design drawing for the Obelisk showing its component parts and alongside a scale model in Portland stone, which was made by Christopher Dean.