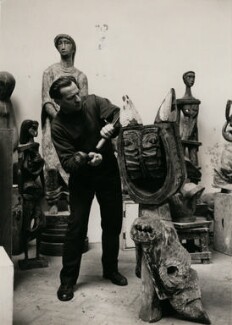 Born in Vienna, where he studied at the Academy of Fine Art while producing carved umbrella handles. He acknowledged the influence of the sculptor Ernst Barlach.
In 1934 he was employed in Devon and came to teach at Dartington School for Dorothy and Leonard Elmhirst. He had his first solo show in 1938 in London and went on to teach at Guildford, Bromley and Chelsea schools of art. He exhibited at the LCC Open air exhibitions in Battersea Park in 48 and 51 and began to work on public commissions. Patricia Fox Edwards (later Gibberd) visited his studio in 1955 on behalf of the Art Trust.

Donkey was originally commissioned for Dartington Hall, Devon 1935-9, where Soukop taught in the 30’s and 40’s. This cast from the earlier one was bought with funds from Maurice Ash’s Elmgrant Trust. This is one of Soukop’s simplest pieces. Although Sir Fredrick Gibberd lamented the damage caused to the collection by climbing children in the case of the Donkey he wrote “the resultant polishing adds to its interest”, whereas Moore’s Family in stone “has been scratched and mutilated”. Pittmans Field is a development by H T Cadbury-Brown, who taught on the relationship between architecture and sculpture at the Royal College.
Donkey is Grade 2 listed 19 January 2016.