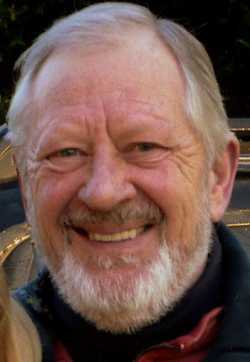 Mills was born in London in 1933. He went to Hammersmith School of Art and studied sculpture under John Skeaping at the Royal College of Art. He has taught in many art schools including St. Alban’s School of Art and Hertfordshire College of Art and Design and has held a number of visiting professorships including University of East Michigan and University of Michigan. Mills has consistently made sculpture in a figurative style. He has published extensively on various sculptural techniques and currently casts some of his own work in bronze at his studio in Hertfordshire. He wrote a recipe book for moulding and casting using high alumina cement in 1958 and in 1962 ‘Technique of Sculpture’ now titled ‘Encyclopedia of Sculpture Techniques’ for students and sculptors.
His solo shows include the A.I.A. Gallery (1959), Lantern Gallery, Michigan (1970-74), Beaux Arts Gallery, Bath (1988) and Vilas Fine Art Gallery, Letchworth (2001-3). His group shows include the Royal Academy (since 1951), Chelsea Harbour (1993 and 1997), Woodlands Gallery (1992) and Newby Hall, Ripon (2001-2). He had a major retrospective of his work at the Gibberd Gallery in 2011 (See newsletter 13).

Mills has carried out many public commissions including work for various London County Council schools, the William Blake Memorial, the Monument to the Women of World War II in Whitehall, the National Firefighters Memorial at St. Paul’s, London, River Man for the Docklands area in London, the Risen Christ for St. Mary’s Church in Ashwell, Hertfordshire. and Quadriga Fountain in Charleston, USA.
In the 1990s, besides making and showing his own sculpture, Mills has designed many medals and has won a series of Royal Mint competitions for commemorative coin designs. Mills was elected president of the Royal British Society of Sculptors in 1986 and 1997 and was made Fellow of the Royal Society of Arts in 1993. He lives and works in at Hinxsworth, near Baldock, Hertfordshire. He was a friend of Betty Rea and completed the casting of her last work for her.

This is one of a series of sculptures based on Mills’ artist ‘heroes’. Other works were based on Rembrandt, Michelangelo, Orson Welles and William Blake. The sculpture reflects the artist’s recollections of Keaton as he appeared in the film ‘The General.’ The flattened form is almost two-dimensional to suggest the cinematic idiom. Mills donated this piece to the Trust in 1994. It was officially unveiled at the opening of the MGM cinema in Harlow in June 1996 to celebrate a hundred years of British Cinema.

Chinese Dynamic
Bronze
1992
270x270x100 cm
Tesco, Church Langley (owned by Tesco)
Installed in 1994 it is inspired by images of the Tang horse seen in the British Museum.