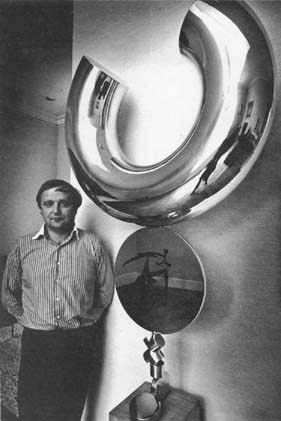 Born 1939 in Lithuania the son of an architect and a mother who was a keen promoter of Lithuanian folk dance, they became refugees from Germany and moved to the US where Antanas went on to study art at the Art Institute Chicago 1956-61. He won a travel grant from the Edward L Reyerson trust and came to stay in England in 1961 on this travelling fellowship, teaching part time at the RCA. His work showed the strong influence of Lipchitz and his cubic forms and he produced welded steel pieces. His work was seen by Sir Phillip Hendy, first Chairman of Harlow Art Trust and on his recommendation ‘Metal Sculpture’ was acquired for Harlow’s Water Gardens in 1967.
In 1970 Brazdys made a work for the entrance to the British Pavilion in Japan and made ‘Echo’ for Harlow New Town in 1973.
He showed work at Annely Juda Fine Art Gallery in London in 1971.
He won the Sunday Times competition for young British sculptors under the age of 35 and from it was commissioned to produce ‘Ritual’ for the Woolgate Exchange, London EC2R. The competition was judged by Misha Black, Design Research, Reg Butler, Director of the Slade, Professor Norman Reid, Director of the Tate and Bryan Robertson, Director of the Whitechapel Gallery. It was unveiled by Jenny Lee, Labour’s Minister for Arts (who started a fund to build the theatre for Harlow and opened Harlow Playhouse Gallery,1971). ‘High Flying’ was shown at the Playhouse Gallery in 1978.

Metal Sculpture
Mild steel welded and painted black 1965
Ht 4’ 7” 140 cm
Acquired by the Trust in 1967 it was sited in the Water Gardens, Town Centre, when the area was being remodelled, it was moved to the new Museum grounds on First Avenue which was previously the Bicycle Museum. Hendy from the Art Trust saw his work at the Royal College of Art and encouraged Lady Gibberd to view it. There are four works now in the collection and three: Owl, Fountain and Rings in the Gibberd Gardens.

Echo
Stainless steel 1970
Ht 380 cm
Commissioned by the Trust in 1970 for siting near Staple Tye Shopping Centre and relocated to the junction of Parnell Rd and Southern Way because of redevelopment.

High Flying
Stainless steel welded 1977
145 x102 x 28 cm.
This was acquired by Harlow Art Trust in 1978 after being exhibited at the Playhouse Gallery (see Exhibitions) originally in the Harvey Centre and is now back in the Playhouse (wall mounted).

Solo Flight
Stainless steel 1982
792 x 610 cm
First Avenue, Felmongers.First sited in the Central Mall of the Harvey Centre until the new owners installed a glass enclosed lift. It is dedicated to Sonia Anderson, Harlow Councillor and HAT trustee. The Art Trust had the wings reinforced when it was moved to First Avenue. It is owned by Harlow District Council.
A detailed write up of this work by John Graham is in the Newsletter 2012 August No 15.