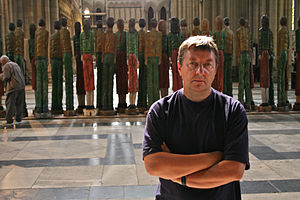 Koenig was born in Manchester in 1951 and is of Polish descent. He studied Fine Art at Brighton Polytechnic then the Slade and became an Associate of the Royal British Society of Sculptors.
In 1982 he was resident sculptor in Grizedale Forest, Cumbria. He is recognised for his use of wood.
In 1996 he won a competition to commemorate the coal miners and steel workers of Bilston.
He has exhibited and sold work internationally from London, Poland and China. He works mainly in wood, carving, painting and printing on it. His output is diverse from portraiture to furniture for interior and exterior settings. He runs workshops, many school based. He lives in Brighton.

Donated to the Trust by Patricia Gibberd in 2003.

I am all leaves
Wood relief
1984
218×136 x3 cm
The Playhouse, Town Centre
Purchased jointly by Harlow Council and the Harlow Art Trust from the exhibition in the Gibberd Gallery 2009.

See under Exhibitions for details of the retrospective

Three Totems, wood carving, is on loan to the Gibberd Garden from the artist.