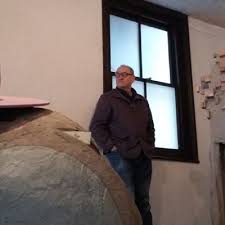 Grandjean was born in London 1949. He lived in Harlow from age 12 and was one of the first pupils at Burnt Mill School. He went on to study at the North East London Polytechnic 1967-8 and then Winchester School of Art till 1971.
He established his own studio in London later moving to Norfolk, where he lives, works and exhibits. He was Deputy Head of Sculpture at the RCA in 2009.
He has been commissioned by RBS, Bleinheim Group and Nottingham University. He also works with poets and sound artists.

Chorus was acquired by the Harlow Art Trust in 1996 to celebrate the anniversary of Harlow Chorus. It stands in the grounds of the ARC. The centre holds regular concerts and musical events.