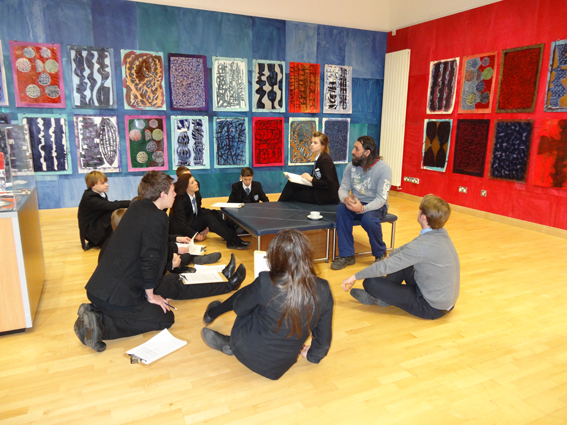 He grew up in Sunderland and took an interest in printmaking in sixth form. Studying art at Brighton he went on to the Royal College to do a Masters in Fine Art and Printmaking.

He moved to Stroud, Gloucestershire in 1987 where he took up ceramics and later metalwork in 1995. His studio is in the Old Convent in Stroud.
His initial ideas for sculpture are often in drawn and printed form, which he uses to pitch to clients. His pieces are on very large scale. His Quayside sculpture in stainless steel for Blyth is 15 metres high. In 2007 he made works for the Chelsea Flower Show including a totem pole.
He teaches in residencies in schools and colleges and has set up a website for Oxford Museum Service, which is housed in a metal structure he designed to look like a display cabinet. He has had a bursary from the Henry Moore Institute and exhibits sculpture and prints nationally.

This was commissioned by the Harlow Health Centres Trust for Addison House.

Shenzou (an old name for China which also means divine). It was the name of the spacecraft designed by the People’s Republic of China for human space flight which carried a Chinese astronaut in October 2003.
It also has the connotation of ‘a challenge’. There are associations with Chinese calligraphy in work and relate to the artist’s printwork.