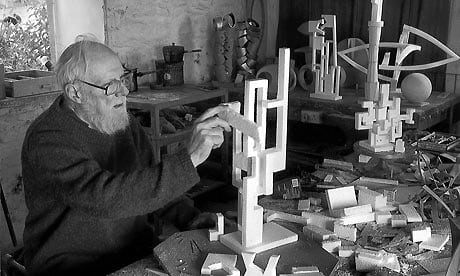 Born in Newton Abbott, Devon. He studied art at Paignton College and went on to the Royal College of Art until the war in 1941, when he went with the ambulance service to North Africa and then France. It was in France that he saw and was inspired by Romanesque sculpture. He taught at Winchester School of Art in 1948 and moved to Lagos, Nigeria in 1955 to set up an art department at Yaba Technical institute. The studio produced wood carvings in ebony and iroko and also designed commercial furniture.
Returning to Cornwall he moved near to Hepworth’s studio in St Just but began to produce work more industrially inspired than the naturalistic approaches of Hepworth. His materials had moved from wood to bronze and iron to stainless steel. He made many architectural sculpture for international companies like Chase Manhattan and large public works like ‘Sky Sails’ for Bristol.

He had his first solo exhibition in London (Drian Gallery) in 1965 and Marlborough Fine Art in 1975. He exhibited in Harlow Playhouse in 1978 and in the Gibberd Gallery in 2008.
He was concerned with the relationships of shapes and how they interlock sometimes using kinetics.
He had many talents in architecture, painting and as a novelist and pianist. He died age 86.

A large mobile, Gymnopedie, by Mount was purchased for the Harvey Centre but was later exchanged for this smaller piece.*

An exhibiton of his work was held in the Gibberd Gallery in the summer of 2008. See Newsletter No 4 June 2008

See Newsletter No 25 February 2016 for an article by John Graham
He had his first works shown in Harlow Playhouse in 1978 which was curated by Pat Gibberd. See Exhibitions