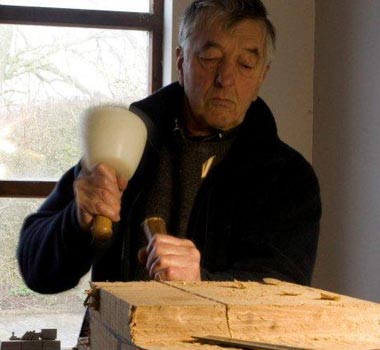 Watson was born in Gateshead in 1937. He studied at Durham University and taught in the sculpture department at Newcastle Polytechnic. Watson has shown work with the Newcastle Group in the 1960s, in the exhibitions Northern Sculptors (1967) and Figurative Art North (1972). Since the 1970s, he has carved a series of familiar, domestic objects in wood or stone. In 1992, while Fellow at the Scottish Sculpture Workshop, Watson made Bookstack, a carving in granite which depicted a pile of fifteen books, for a site at the University of Northumbria. Commissions include Inside Outside for Gateshead and a series of works comprising free-standing sculptures, way-markers and benches for a redevelopment scheme at Chester-le-Street as part of the Year of Visual Arts in 1996. In 2002 a granite sculpture, Media Studies, was commissioned by Wingfield Arts Centre. Watson lives and works in Northumberland.
Four stone carvings were shown at Cheeseburn Stables in 2016 and his wood carving there in 2017.

Still Life was Watson’s first major public commission. Originally, it was due to be made in red brick but the artist offered a carving instead. In January 1984, he started work on four blocks of stone (each weighing over one and a half tons) from the Springwell quarry in Gateshead. It took him a year to complete. The weight of the finished piece caused some problems at its installation; the sculpture, dangling from slings on a gantry, had to be wheeled manually to the prepared plinth in West Square. It was then settled onto mounds of ice so that the slings could be withdrawn as the ice melted.

Watson has dedicated his artistic life to making still lifes (all his sculptures are called still life). Like Morandi he is fascinated by the stillness of inanimate objects, as well as meanings that they hold. For example coverless books are meaningless until opened; with Watson’s books you can never open them.

The white lines around the sculpture illustrate how it was made, at one time the joins would have been seamless, but resin discolours and the sculpture has opened up. Still Life is an extremely popular sculpture for sitting on, more so when the Odeon cinema was opposite it. This is why it is so dirty.

Inspired by seeing his brother’s TV on some antiquarian books in his London flat this work refers to forms of communication.

His Stone Bottles are in the Gibberd Gardens near the Gazebo.