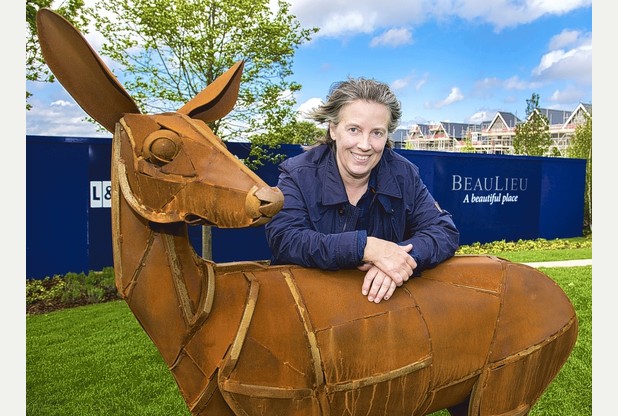 Jane Ackroyd: life story
“I was born in London into a seemingly conventional family. We lived in Nottinghill, which as a child in the sixties was a brilliant, bohemian and exciting place to be. My parents were extremely supportive of the arts and encouraged every aspect from acting to drumming to clay sculpture. In the basement of our house there was a large room, in which we were allowed to play havoc. So we painted the walls, made up plays, used plaster of paris and bags of clay (supplied by my mother). In this room we also had a vervet monkey, a bush baby, twenty one white mice and a couple of gerbils! Every Sunday my father would drop me and my brothers and sister at the zoo while he vanished to follow other pursuits. This is when I became immersed in the beauty of animals and birds.
Before going to college I did evening classes with a sculptor called Jean Gibson and this experience gave me the confidence to apply to Art School. I got a first class honours degree at St Martin’s School of Art in 1979. St Martin’s opened my eyes to abstraction, serendipity and spontanaeity. During this time I discovered steel and have never looked back. I enjoy it’s flexibility and strength. It is the material of my choice for the subjects that I want to create. This period was inspirational and explosively creative. I then went on to do an M.A at the Royal College of Art 1980- 1983. Here I received the Special Melchett Award for work in Steel, the Fulham Pottery Award and a travel scholarship to Carrara.
I have produced many public and private commissions and am in collections in the US, France, Switzerland, Italy and the UK. A large commission in collaboration with Levitt Bernstein Architects on the redevelopment of the Old Royal Free Hospital in Islington in 1993 won the Europa Nostra Prize. In 1995 I won an award from The Jackson Pollock-Lee Krasner Foundation for work to date.”

Jane’s work has been regularly shown at the Royal Academy Summer exhibitions 1989-2012 with regular solos at Kingsgate Gallery and many public collections such as the Arts Council, London Docklands Development Corporation and Lloyds Bank.

Purchased by Harlow Art Trust in 1983 from her degree show at the Royal College of Art. Stolen from the Old Town Library and painted gold by the thieves. Recovered in 1995 now located in the Gibberd Gallery.
An early work by this artist, which was probably inspired by the animal sculptures of Picasso. The Cat is a composite of everyday objects welded together.

There are two other steel sculptures (painted) in the Gibberd Garden: Carousel and Queen of Hearts.