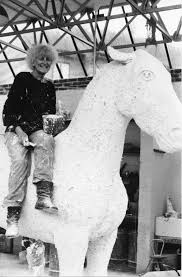 Frink was born in Thurlow, Suffolk in 1930. She studied at Guildford School of Art and Chelsea School of Art. Frink taught at Chelsea School of Art and St. Martin’s School of Art, London and was a visiting instructor at the Royal College of Art. She was honoured with a C.B.E. in 1969, a D.B.E. in 1982 and a Companion of Honour in 1992. Frink produced a series of works based on naturalistic forms and themes, especially working with animal and bird subjects in the 1950s and 1960s. A good deal of her work reflected her interest in the theme of flight and she produced a number of sculptures which involved winged creatures and falling figures. Later, she worked on a series of ‘goggled’ male heads which explored themes of masculinity and strength and reflected her lifelong concern for world peace. Her work has been shown extensively in this country and abroad and she had a major retrospective exhibition at the Royal Academy of Arts in 1985. Her work is in all major collections including the Tate Gallery, the Arts Council of Great Britain, the Royal Academy, the Walker Art Gallery, the Whitworth Art Gallery, the Museum of Modern Art in New York and the Carnegie Institute. Frink died in 1993.

Boar was commissioned as a concrete sculpture in 1957 for Slacksbury Hatch. On completion the Trust decided to site the work at Bush Fair shopping precinct. The Trust usually nominated a member to oversee the commissioning process; this was more often than not Lady Gibberd as she was not in work and had free time to commit to commissions. In this instance it was Sir Frederick Gibberd as he had had a relationship with Frink, who had been commissioned to make the altar crucifix for Gibberd’s Liverpool Cathedral. A preliminary drawing of the altar crucifix and the Boar can be seen at the Gibberd Gallery in The Fredrick Gibberd Collection.

On completion the Trust were not happy with the final work and withheld Frink’s fee. The work was modelled straight from the concrete and not cast as expected, although the Trust had not specified the work to be cast. The Trust insisted that Frink undertake a series of changes notably refinement of the surface and colour. The Trust reluctantly paid her fee.

Unfortunately the original version suffered from vandalism and weathering and, in 1970, was recast in bronze. It was sited at the Water Gardens in 1989.